“The snow-fed creeks that tumble down the foothills to the broad plains along Colorado’s Front Range, the eastern face of the central Rockies, do not bring to mind raging, out-of-control floodwaters filled with debris – a potential for death and destruction to property.

“From the month of May through September of any year, however, warm air masses from the Gulf of Mexico may circle upslope toward the Front Range, bringing with them storm cells that can produce intense rainfall. The resulting cloudbursts may quickly fill the channels of these small creeks which then take on a vastly different character.” – Phyllis Smith, A History of Floods and Flood Control in Boulder, Colorado.

Looking over the press on the floods in Colorado, one can see our values of safety and security become the tools against which we measure our experience during a disaster. Floods, like many natural disasters, erase our sense of personal safety and the permanence of our homes and prized possessions. The speed with which we find our confidence erodes and the psychological ground comes out from beneath us is particularly shocking during flash floods that are typical along the Front Range.

Coal Creek inspired terror on Monday last, if never before. About noon the streets of Erie began to fill with water, and before an hour had elapsed, houses were flooded and the whole flat on which the town is located was swept by a muddy, roaring flood, over a quarter of a mile in width.

In the face of disaster, survival instinct drives. In the process of coming to grips to phenomena that defy our everyday experience, the first questions to cross many people’s mind center around what we could know that would helped us act more effectively in our own best interest.

The shocking images and truly horrible stories from the recent floods from Mexico to the Wyoming border belie an ironic truth exposed in Phyllis Smith’s 1987 treatise on floods and flood control in Boulder: The 440 square-mile watershed that forms Boulder Creek and its tributaries is one of the most studied in the world, and Boulder has long been considered one of the cities most at risk of flood damage in the country.

This conspiracy of terrain and climate that has made Boulder famous are not limited to the Boulder Creek flood plain. The South Platte flooded in 1844, according to an 1864 newspaper article in Denver; Major James Bridger tells of the flood and how 9 days passed before he could cross the river near its confluence with Cherry Creek.

In 1864 floods again ravaged Denver and “down the Platte went the new city hall, the Trinity Methodist Church, and the offices of the Rocky Mountain News.”

Boulder Creek began flooding a late May morning in 1894 during a storm that dropped rain for 60 hours on heavy snowpack. Nearly 9 inches of rain fell at Ward; Left Hand Creek, which flows into the Saint Vrain, swelled to 300 yards across. Witnesses said “Jamestown’s church floated downstream with its bell tolling.” Near Eagle Rock, a woman was found “waist-deep in mud, holding one of her children aloft.”

In Boulder, the downtown’s bridges washed away. Basements filled with sand and silt. The town’s swollen waterways now carried houses, out buildings, huge rocks and trees. Floods came again in 1897, 1904 and 1909.

In March of 1910, renowned architect Frederick Olmsted, Jr., issued findings from his survey of the Boulder community at the invitation of the Boulder City Improvement Association. He said Boulder should expect to “inevitably pay the price in destructive floods” if, “lulled by … a few seasons of small storms” development along the channel of Boulder Creek and its tributaries continued.

He recommended the city preserve “a simple piece of pretty bottom-land of the very sort that Boulder Creek has been flooding over for countless centuries, of growing a few tough old trees on it and few bushes.” Children could romp and passers-by could enjoy the best views of the foothills from the shady banks of the creek. “And,” Olmsted added, ”it is probably the cheapest way of handling the flood problem of Boulder Creek.”

The Boulder Valley also saw flooding in 1914, 1919, 1921, 1933, 1938 and 1939, according to Smith. Yet by the late 1950s, there had been major development in the Boulder Creek flood plain. As a result, the chance of flood damage in Boulder had increased by 30 percent since 1938, according to a 1958 study of U.S. flood plains out of the University of Chicago. Notice the chance of a flood and the chance of flood damage are not the same. The study also found most folks in Boulder didn’t think flooding was an issue for the town any longer.

This was not the first serious examination of the flood plain since Olmsted’s. It was the seventh. The studies were nearly unanimous in their view of the proper flood control methods, much in line with that of a paper delivered by the Tennessee Valley Authority Chairman at a hydraulic engineers’ conference in Fort Collins that year, which said: “the only solution for floods is to keep people away from the water, not to go on attempting at great expense to keep the water away from the people.”

By the mid-1980s the city had begun to implement something in the spirit of these recommendations in the form of the greenway/flood control system that now includes the Boulder Creek bike trail. And during the flood this week, the bike trail filled with the now-familiar sand and mud, but Boulder’s downtown bridges are largely intact and damage to the downtown area in particular are minimal. But literal cascading failures of the water works along just about every other tributary wreaked havoc on the rest of the city.

What seems remarkable looking back on the history of flooding along the Front Range are our short memories, our poor assessment of future risk, and the gap between our value of security after the flood and our standard of care before the flood. By any measure, it took Boulder more than a century to heed the stories of great floods told by the Southern Arapahoe Indians that hunted at the mouth of Boulder Canyon when white settlers first arrived.

And we still have a lot to learn, or maybe relearn. At the city council meeting the day after the rains stopped, Boulder’s fire chief said the city had never imagined and drills never included a flood scenario in which all of Boulder Creek’s tributaries flooded at the same time to explain the backup of the city’s sewers during and after the storm.

But Boulder Creek is just one path water finds along the Front Range. Our last flood affected 17 counties. And today, the stakes are higher. In our Front Range urban areas, increasing land value and improvements mean higher damage totals. Increased petroleum and industrial agricultural activity increase the risk of both property damage and environmental catastrophe (at the time of this writing there are at least five “notable” spills from the flood in Weld County alone). And meteorologists and climatologists say we can expect more of these storms, not less.

Our instincts tell us we may not see flooding like this again in our lifetimes. Our values guide us to hedge our bets in the interest of our safety and security. Our history and science point the way to the most effective solutions. What actions should we take as inspired citizens of a strong Front Range community? 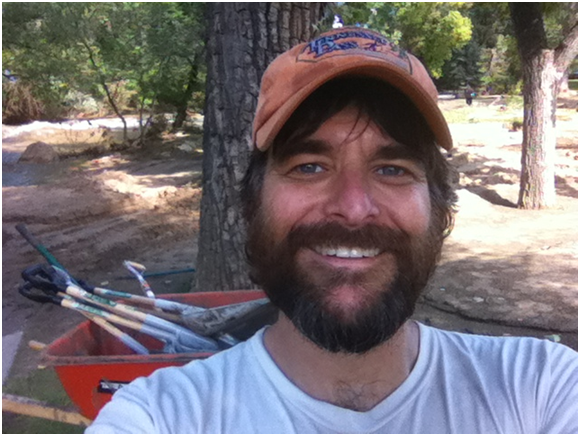 Jason Dilg is TEDxMileHigh’s producer. In 1989 he spearheaded a team of college friends to work with the Red Cross in the aftermath of Hurricane Hugo and has been a disaster nerd ever since. His Boulder apartment stayed dry just out of the Goose Creek flood plain, but he spent much of his time in town during the flood shoveling sand and mud from Gregory Canyon at 7th and University, and reading.